Seven authors (Jo Davis, HD Hatcher, Omegia Keeys, Autumn Prince, Lisa Rusczyk, KJ Thompson, and Vogue) have joined forces to send one message. That message is, You are not Unloved! Unloved is an anthology dedicated to those who have been the victim of bullying, or know someone who has been bullied.
Bullying was once considered a harmless rite of passage. Some were either bullied in school or they were the bully. What was once considered an acceptable practice has now been drawn into the limelight by the national attention of highly publicized suicides due to bullying. 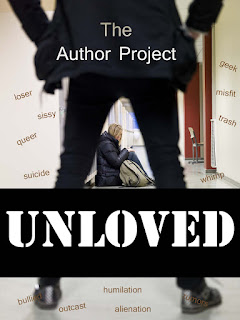 Bullying can take on different forms. Bullying is not just a physical act but can also be an emotional, written, or verbal act as well. Bullying can take place in the workplace, school, online, and even while we are traveling in our vehicles on the road. Bullying is a form of abuse that has reached epidemic proportions in the United States and civilized nations across the globe.
When bullying goes too far, the end result is sometimes suicide. Suicide should never become an option. One life lost to this senseless way, is one too many!
All proceeds from Unloved will go to charities in support of Bully Prevention and/or Suicide Prevention.
For more information, please visit: www.hdhatcher.com or www.passionatewriterpublishing.com or visit the Unloved Facebook page.
Read more: http://socyberty.com/issues/unloved-by-the-author-project-to-be-released-january-11th-2011/#ixzz1FvLBZMwi
Check out: http://www.passionatewriterpublishing.com/unloved.htm

Lisa Rusczyk is the author of The Blue Pen, Sam the Night Person, Full Moon in December and A Dream of the Past. She lives in North Alabama with her husband and six beloved cats. Chasing the Dark

is her newest novel:

Melanie’s a budding artist always looking for the next high. She finds it one night when Sora and Josh take her on an ambulance-chasing ride. They watch a gruesome scene as the bodies are removed from the wreckage. Melanie doesn’t know why, but she is both attracted to this new pursuit and afraid of where it will take her.
The chasing brings Melanie closer to the mysterious Sora, his secret past, and the darker things that happen in the city at night. Along the way Melanie must face her own demons while escaping the drug dealing business.
Join Melanie and her friends Shara, Manny, Max, Sora and Josh as they confront and chase away their own personal demons.