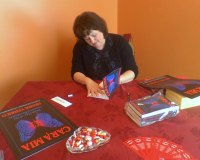 When I set out some fifteen years ago to write a vampire novel, I did a lot of research into vampire lore and read some of the classic stories. I found that almost every culture has some form of vampire legend. At that time there wasn’t nearly as many novels about vampires. Now they have their own sub genres in urban fantasy, romance and horror. The idea of science fiction vampires appealed to me. Richard Matheson’s I Am Legend

is the classic example. Graphic novels and films have also explored this idea. I like to read about biological science and biotechnology. A story about a race to capture the vampire’s immortality sounded like a good idea to me.
The fun begins with the research. Science fiction uses science fact as a springboard, but with a heck of a lot of creative license. My favorite science fiction author, Ursula K. Le Guinn says, “a novelist’s business is lying.” That being understood, it’s time to build a world.
My premise is that vampires are human beings with a unique mutation. I hit upon the idea of a symbiotic organism passed through blood. This organism, like a virus, would bond with human DNA, but instead of destroying human cells, it would allow them to replicate perfect copies of themselves forever, preventing ageing and death. Human DNA is programmed to only produce so many copies and these grow less perfect as we age. Could my premise of a symbiotic organism that confers immortality really happen? Probably not. Is it possible to arrest the ageing process? Possibly. Experiments using mice and fruit flies have been able to extend the lifespan of these creatures beyond the norm. We’re still a long way off from immortality.
There is always the challenge to create believable characters in a very unreal world. Although some of my vampires are sympathetic, I still wanted them to be dangerous, because they obey a biological imperative. I try not to write characters that are just plain evil because they aren’t as interesting. Usually my villains’ agenda conflicts with the heroine and hero. In creating my vampires, I wanted them to still have a human psyche, with the understanding that the mutation causes them to behave like a predatory animal. It turns on their senses and a lust for blood. This of course, messes with their brains and many of them have difficulty dealing with their condition.
I looked into psychological studies on violent behavior in human beings. I learned that sociopaths lack empathy, which allows them to objectify others and even make a fetish of violent behavior. Certainly some of my vampires fall into this category and don’t agonize over killing human beings. Most of them compartmentalize their emotions. Studies have suggested that people under duress or expediency will treat others abysmally or even violently if the behavior is “permitted” by authority figures. They begin to categorize people as “others” or less than human, therefore their violent behavior is acceptable to them under the circumstances. However, there are those individuals for whom this is unacceptable and don’t make this disconnect. They will rebel against the idea that violence is okay.
Okay, so there’s the convention of blood drinking. I like that one. To me a vampire should have some “kryptonite” or else everyone would want to be a vampire. I found out that human beings suffering from a condition called porphyria have a need to ingest foods rich in iron like liver. They can also become photosensitive and avoid sunlight. Drinking animal blood seems like a cop out to me. My vampires do eat and drink like other people, but the blood is an essential element of their diet. The symbiote depletes compounds in the vampire’s blood needed to sustain life. These must be replenished and animal blood lacks the right combination.
Another of the traditions that evolved in vampire literature was the need to stay out of the sun. Some contemporary stories don’t follow this convention. In fact, this is an idea that gained steam in the movies. In the novel Dracula, the count went out in the daylight, but he was weaker. In the film, Nosferatu, Count Orlock bursts into flame when sunlight floods in on him.
I happen to like the idea of the sun being fatal to vampires, but in a biological world they wouldn’t burst into flame. How could a body decompose in a very short period? I saw a program about flesh eating bacteria, (necrotizing strep). In a matter of hours this virulent bacteria can devour body parts. Could this be a way to describe the effect the sun has on a vampire’s body? Perhaps ultra violet light mutates the vampire’s DNA and causes the cells to grow erratically. Cancers are cells that grow unchecked to the point where they destroy neighboring structures in the body. Ultra violet light can mutate cells causing skin cancer. Imagine this happening in a matter of hours. My theory is that the symbiote evolved in a place without sunlight. Just where that place is remains to be revealed in future books.
The job of the science fiction writer is to take some real life science and ask those “what if” questions. Allow the research to feed the imagination. If you spend the entire book talking about this stuff it bogs down the story. Every story is at heart a human struggle, no matter if you’re writing about vampires, aliens or androids. The hero or heroine must have a driving force or inner conflict. My heroine, Mia, wants to walk again in the sun.

http://rcm.amazon.com/e/cm?t=wiswor0a-21&o=1&p=8&l=bpl&asins=160318158X&fc1=000000&IS2=1&lt1=_blank&m=amazon&lc1=0000FF&bc1=000000&bg1=FFFFFF&f=ifrCara Mia is available online at: www.deniseverrico.webs.com (author signed copies), Amazon, Barnes and Noble. Borders and Fictionwise in trade paperback and multi format e-book including Kindle. It can also be found in some bookstores or special ordered.

Read an excerpt of Cara Mia here
And treat yourself to a snippet from Denise’s new book Twilight of the Gods here.